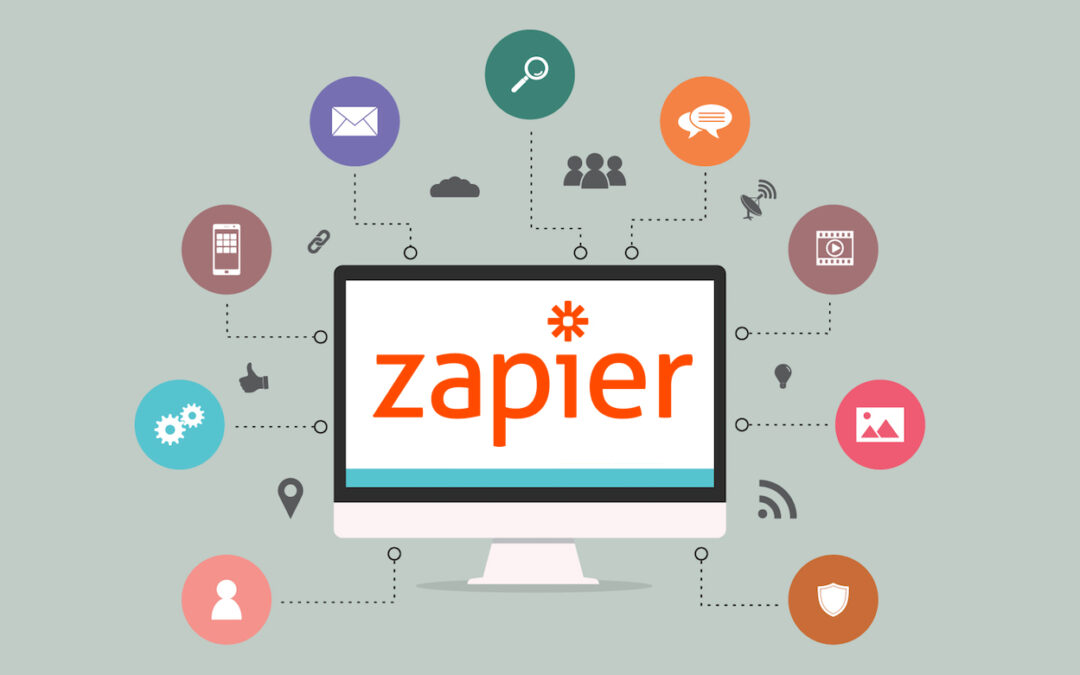 Zapier is fast becoming the default integration and automation tool for SME’s and enterprises looking to connect up their tech stacks. After all, why go for a single solution provider when you can build your own best of breed marketing stack for a fraction of the price?

We’re massive fans of Zapier here at Kulea, and use it daily to integrate our own marketing automation tools with third party solutions used by our clients, such as Pipedrive, Google Sheets and WordPress.

With it’s easy to use no code/low code interface, it’s a fantastic tool for beginners looking to get to grips with automation, but Zapier also has some pretty powerful advanced features (mostly sitting in it’s utilities folder) that can turn good automations into a great automations.

Jump straight to the trick…

We’d like to share these advanced Zapier tools with you to help you get the most out of your Zapier experience, so with out much further ado…

Zapier power users often find their costs increasing due to the number of tasks they use every day.

Whilst each task may have an almost negligible individual cost, those numbers can quickly add up and push you into the next pricing tier.

It therefore makes sense to minimise the number of tasks you’re using to bring down your costs and make your Zaps more effective – and filters are your main way of achieving this.

By applying a filter at the early stages of your Zap, you can filter out any unnecessary traffic. Filters don’t count towards your monthly task quota, and for that reason we consider them to be the number one way to make your Zaps more efficient.

If you think of each Zap sequence as a night on the town, and your Zapier tasks as the pubs the sequence stops in at on the way to the club, your filters (in this overly stretched metaphor) are the burly doorman that stands at the entrance to the first pub you come to.

If your name’s not on the list, you’re not coming in, and whilst other contacts can continue on their merry way, unnecessary automation are sent home for a cheap night in front of the tele watching Friends reruns.

So, how do you apply Zapier conditional filters?

You can add a filter at any point after the trigger and you can also use multiple filters in the same Zap.  Filters use conditional logic in much the same way as Kulea’s journey builder does, so you can layer filters on top of each other using and/or conditions – see next step!.

Your filter can have multiple criteria, and these criteria can be added using either AND or OR logic. Learn more about the difference between AND and OR logic in filters.

If the test data would have passed the filter, you’ll see a confirmation that the Zap would have continued.

If the test data doesn’t meet the filter conditions, you’ll see a confirmation that the Zap would not have continued.

After the filter is created, you can continue setting up the rest of your Zap. The actions added to the Zap after this filter step will only be performed if the incoming data passes the filter, and you’re only charged for actions that are taken!

If you’re a regular user of Pipedrive, you’ll have spotted that when using multi-select inputs, such as checklists, when calling the results in Zapier you’re presented with lists of numbers, rather than the text values that were actually selected.

That’s because Pipedrive, and lots of other CRMs for that matter, simply aren’t equipped for free text input on multi-select options, instead opting to allocate numeric identifiers to the options.

Unless you want to use the options in your email marketing content, that is.

This is where Zapier’s awesome formatter tool comes in really handy.

Think of formatter as a translator.  It takes input A, and translates it into Output B.  It’s like the Babel fish (Google it!) of the automation world.

The Zapier formatter is a really useful step that you can add into your Zaps before sending data across to its destination, so that when the data arrives it’s in a format that can be used by the recipient solution (in this case, Kulea).

To walk you through how this works, we’re going to be using a look up table to provide the translation, but please do bear in mind that the formatter has many other options and tools contained within it that we recommend exploring (we’ll include a few more examples further down the page).  Anyhow, let’s set up that look up table for you….

You can add a lookup table at any point after the trigger and you can also use multiple formatters in the same Zap.

The lookup key is simply the field that you’re looking to translate.  In the example we used above, the lookup key would be “sector”. The Zap will use this value to search the lookup table for the correct row. 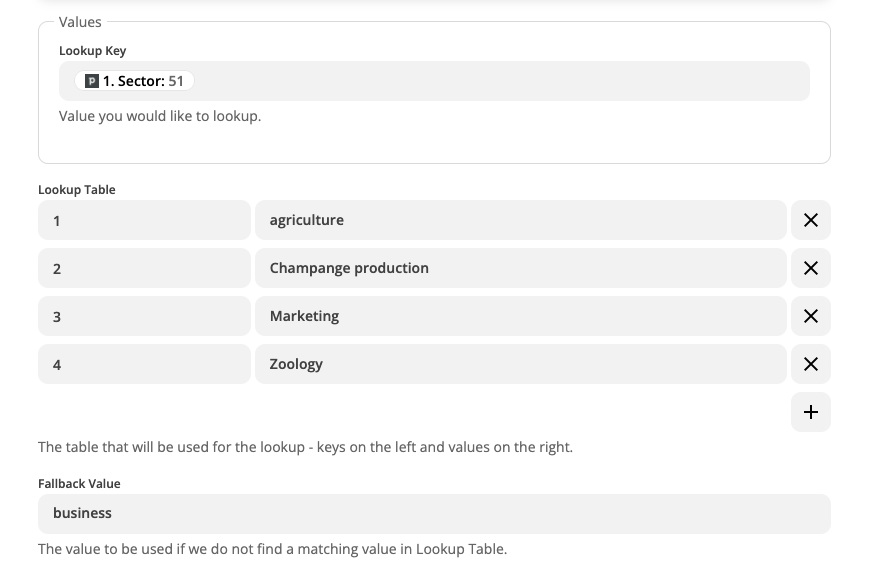 You will also need to add a fall back value that Zapier will add to any output that doesn’t have a  corresponding value in the left hand column.

Now your lookup table is complete, simply wire it up to your action and Zapier will offer up your outputs for integration into whatever solution you need them for!

Here’s another example where Formatter is awesome.

How many times do you have an output from your CRM for ‘name’, but want an input for another tool that’s either ‘forename’ or ‘surname’?

All the time, right?

It’s an absolute classic use case when moving your CRM data to your email marketing tools.  You don’t want to be sending emails starting “Dear Joe Bloggs”.

“Hey Joe” is so much more personal.

This is exactly the scenario where Zapier’s text splitter is invaluable, and it’s really easy to implement by adding a single step into your Zap.

You can now select the field you would like to split.

2. Connect to your action

Your action step will automatically pull data from your trigger AND your newly created step, so you can now quickly and easily wire up your Zap to push forename into the receiving application as you would under normal circumstances.

Text splitter is just one of a number of really useful text utilities that can be used.  You can, for instance, also use text utilities to change capitalisation of words, find and replace words, and even convert text into HTML commands.

This is something that every advanced Zapier users comes up at against at some point.

Each change triggers a change at the other end, and boom, and infinite loop is born!

The good news is that Zapier more often that not picks up on this and after the first 100 zaps, and will press pause ion the zaps until you’ve addressed the issue.

The even better news is that you can nip this problem in the bud before it even gets to this point.

The solution we’ve found to infinite loops is quite an elegant one.

When an update is made, simply drop a temporary ‘recently updated’ flag into the receiving platform, and set this flag to expire after 15 minutes. Within your zap, set a filter in place to check if the flag is active. If it is, filter the zap out. If it isn’t, then allow the Zap to proceed.

Infinite loops are now a thing of the past!

Finally, we come to conditional logic, which Zapier, in their wisdom, have rebranded as “paths”.

Paths are so advanced that you have to be on a Zapier Professional Plan or higher in order to use them, but despite this, they’re actually pretty easy to set up.

In Kulea, paths are created using else statements (If they like sports, so this, else do this), but apart from that, the principle is pretty much the same.

In Zapier, paths are created by adding an addition step, which you can then also nest further paths inside. It sound kind of obvious, but it’s worth mentioning that if you want to subsequently add additional steps/filters/utilities etc, you will then need to add them to each path you have active, so it’s always best to put these in prior to the path branching away from the main journey if possible.

Now, if you’re thinking that paths sound awesome, but you don’t have Zapier’s Professional Plan or higher, then don’t worry.  You can pretty much recreate paths using filters on multiple zaps.  The benefit of paths is of course that you can have everything sitting within a single zap, which does ultimately make things easier to manage.

Now, if you’re a Kulea user a lot of the conditional logic you find in paths isn’t really necessary, as our journeys do all that for you (and you have unlimited usage of the journey builder, so why would you pay extra for Zaps?), but we have still found a few occasions when Paths are really useful.

You can, for instance, set up actions for different users in different apps, dependent on the path that they’re on.

In this example, if a contact is highly engaged, you can send them across to Kulea for an email outreach sequence, but if they’re only warm, you can instead add them to a Facebook custom audience to increase brand awareness.

You can have up to three separate paths in Zapier, and adding a new path is simply a question of clicking the + symbol.

So there you have it – five simple and elegant functions in Zapier that can help you make more efficient integrations and automations.